I finished reading The Monster Show by David Skal on a recent trip to Paris. Skal’s book presents an intriguing and well researched look into the cultural history of the horror genre in America. From the early 1900s to the late 1990s, Skal examines everyone from Tod Browning to Buffy the Vampire Slayer.

This may strike you as an odd book choice, but for me, my fascination with horror film began with my mother recounting the terror of The Birds when I was 12. (Fun fact: 2 Halloweens ago, I channeled that same Tippi Hedren..) I have many vivid memories of Saturday nights after club soccer with Blue Bell chocolate ice cream and the latest movie suggestion. This highlight reel includes, but is certainly not limited to Wait Until Dark, What Lies Beneath, and Psycho. Fast forward 13 years and I’m super into American Horror Story, Guillermo del Toro, and now continuing to read books like The Monster Show as I grow the depth of my understanding. Horror films, as a genre, are not simply colored corn starch, advancing special effects, and shallow attempts at shock. People turn to horror as a coping mechanism to help them personify their conflicting feelings and fear of the unknown about the world’s current circumstances – or in short, the latest true American horror stories.

To wrap up (and further pique your interest), three super interesting things I learned from David Skal’s The Monster Show:

1. There is a movie called Cat People.
Actually, there are 2, and I had never heard of either. The particularly riveting 1942 tagline reads: “Lovely Woman… Giant Killer-Cat… The Same “Person”! It’s Super Sensational”, while the 1982 remake appears to more sharply focus on the obviously disastrous consequences of female sexual awakenings. Women enjoying sexual urges? Extremely dangerous stuff, you guys.

2. “Suddenly, in the sixties, the womb was the new graveyard”
This continued into the 1980s, but perhaps nowhere near as obviously as Rosemary’s Baby and The Brood. Skal cites “the sexual revolution, the Pill, thalidomide… unstable family structures… [and] the emerging abortion rights struggle” as a powerful cultural catalyst for horror’s new favorite playground. This blog post is SCREAMING at me to write itself… alas, another time, my friends.

3. Carrie was also a musical.
On Broadway. In the 80’s. Absolutely terrible. Where can I find this to watch!?

Bonus: After Paris, we traveled onto Madrid and, in what seemed like a strange, real life, full-circle moment, discovered this Erro painting at the Reina Sofia Museum. I spy quite a few Lon Chaney Jr’s down there… 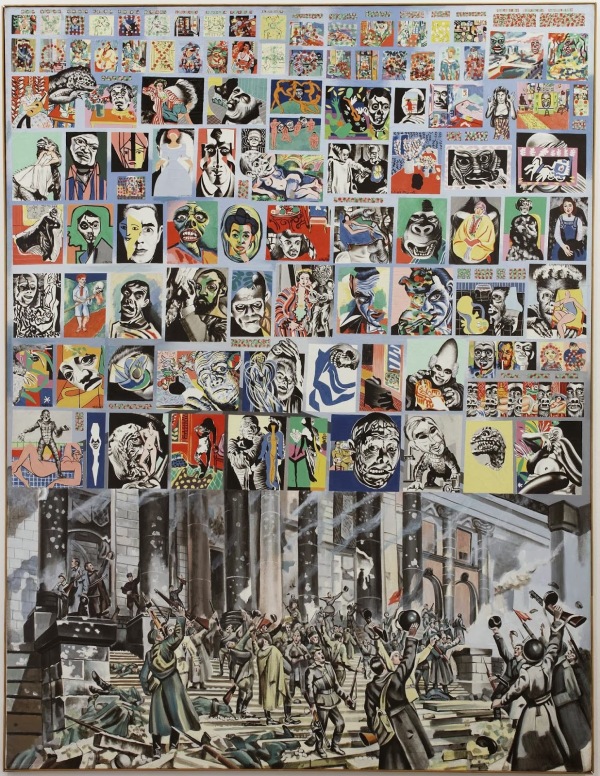